We recently finished reading The Mouse and the Motorcycle, so Robert decided to make Ralph for the school’s Storybook Pumpkin Patch. (He’s sporting a ping pong helmet with a rubberband strap in case you’re not familiar with the daredevil mouse named Ralph.) 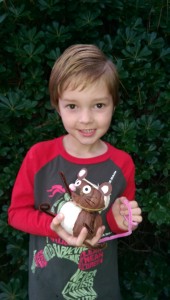 I took Robert to school the morning he was turning Ralph in so that he wouldn’t get torn up on the bus ride to school. Turns out cars aren’t too safe for a mouse either. Ralph was sitting on the seat next to Robert and took a spill when I rounded the corner, breaking off his nose. Robert seemed to take it in stride, especially after I told him I’d glue it back on when we got to school. He just laughed and said that Ralph must have leprosy 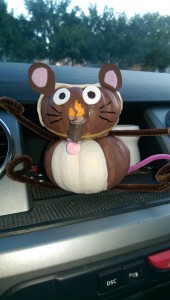 The week before Spring Break was a busy one for us. I turned another year older and we celebrated with Italian food and I was given a complementary birthday canoli for the occasion. My birthday gift from Chris was the maroon leather jacket I’m wearing in the picture. I love it. I don’t feel fashionable enough for it, but I do love it. 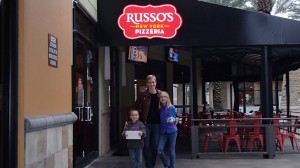 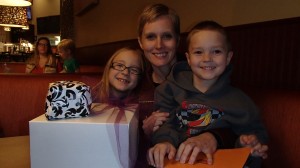 That week was literacy week at Clara’s school in celebration of Dr. Suess’ birthday. They had Muffins with Mom, which no one knew about until the day before (including us volunteers) and I helped with that Tuesday morning. It was complete chaos and we ran out of everything despite the less than 24 hour notice that everyone received. Their bookfair was all week, which I volunteered at during Robert’s school days and on Thursday they had a storybook character parade. I made Clara a Laura Ingalls dress. It was a fairly ambitious project to undertake since I haven’t sewn anything this complicated in a very long time, but I was successful! I free handed the apron because she didn’t like the petticoat pattern that came with the dress. She loved it. 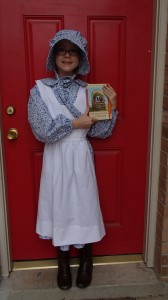 She came to shop at the book fair while I was working, so I had the librarian snap a quick picture of us.

That night was Literacy Night at school. Clara wanted a picture with one of the third grade teachers who was dressed at Laura also. She was talking about biographies and had a video of Little House on the Prairie showing. 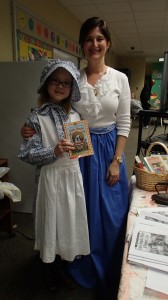 Chris had gone out of town that night for work and was coming home Friday morning. Friday was also the closing date on our new house. We had several complications leading up to closing and we still didn’t have a firm closing time come Friday morning. I was so stressed out that day and drove Chris bonkers. They eventually just told us to be ready to come as soon as they called us.

The call finally came about 4:30 p.m. so we got to the title company as soon as we could. When we got to the table, they still didn’t have our HUD approval and were waiting for it to be faxed over. So we went over everything else and near the end, it finally came through. Sheeesh.

We got out of there around 6:00 and headed into Houston where Chris had made anniversary dinner reservations at a Brazilian steakhouse called Chama Gaucha. It was my first Brazilian steakhouse experience and was very enjoyable. This particular restaurant is supposed to be more authentic and the place that Chris’ Brazilian friends prefer. After such a chaotic, stressful day, we just decided to come on home after dinner. I was feeling mentally drained and just wanted to go to bed.

On the way to the restaurant, I made the decision to leave for Pecos on Sunday. I had put off making the decision until I knew if we would be closing. I couldn’t leave until we had closed. I called my mom to tell her we had closed and since that was out of the way, Chris offered to take off the week of Spring Break so I could go to Pecos and help out however I could since Linsey was on bedrest and they were pretty sure they would be inducing on Monday due to her elevated protein levels. To be continued…….

Y’all know I love a good classic children’s book. I’m discovering most of these treasures for the first time right alongside Clara. I’m pretty sure reading to her in her bed at night is going to be one of my favorite mom memories of all time. I don’t think I’ve read any that I haven’t liked, but I have found a new favorite. Frances Hodgson Burnett’s A Little Princess. It is so, so good! Clara and I were on the edge of our seats just giddy with excitement wanting to know what happens next. I’m usually pretty strict about one chapter a night, but with this one, I just couldn’t help myself. She got two, sometimes two and a half chapters as we neared the end. You’d think I had just told her she could get up and have a big bowl of ice cream or something by the sound of her squeals as I told her “Ok, just one more chapter.” I have to confess I almost snuck the book out of her room on more than one occasion so I could read more, but I didn’t. I was good.

Sara Crewe is the most humble, grateful, strong, respectful, imaginative, compassionate and loving child you will ever have the pleasure of reading about. Whether she is wealthy and spoiled or treated as a slave and going to bed hungry, cold and unloved, she never loses her beautiful spirit. She is a wonderful example to share with your daughter. Or just read it for yourself . I don’t think you’ll be disappointed. I found a used copy of the Shirley Temple movie today that I plan on watching with Clara and I want to get the version that came out in the 90’s as well. Anyone seen it in stores? I’m probably going to have to get in online since so many stores have cut way back on their dvd sections.

Clara started reading her first chapter book today. She’s reading the first book in the Magic Tree House series and is so excited!
Not only is she reading books, she’s also just written a book for school. She decided to title her book “How Babys Grow” and I found page two especially interesting.
In case you can’t tell what’s going on, “the mom is in a bathtub with people helping her and the baby’s head is coming out but the body is still inside.” Hahahahaha. Love it!

As most of you know, our home is filled with books. Chris and Clara have been going to the used bookstore every Saturday after breakfast for several years now. And every Saturday, at least one new book finds a good home here. Even before Clara was born, Chris and I talked about instilling a love of reading in our children and that was one thing we decided we would spoil them with. Our motto: you can’t have too many books.