We wanted to leave Pecos really early on Monday, but we ended up sleeping in a little. I had meant to raid my parent’s pantry Sunday night and grab cereal so we could just eat a quick breakfast before hitting the road, but I forgot. So, it was almost 9:00 when we pulled into McDonalds on the way out of town. The kids sat down as we were ordering and then Clara ran back up to tell us she found Pawpaw

He was at the table next to them having coffee with a neighbor. So he sat and chatted with us as we finished up our breakfast.

Chris was feeling ok when we left and we had a long, 5.5 hour drive that day to our final stop at Inks Lake State Park near Austin. As we got closer, he started feeling worse and worse. By that evening, he felt terrible and didn’t sleep much at all he was so congested, blowing his nose non-stop with a killer sore throat. Turns out juniper was through the roof there and I’m going to go out on a limb and say he’s highly allergic to juniper.

I headed into town the next morning to get meds and kleenex. Unfortunately they didn’t seem to help much. He was a trooper though and managed to hang out when Dan and Linda arrived for our belated Christmas celebration around lunchtime. Linda graciously offered to bring out an entire Christmas dinner so we had roast with all the fixins and pasta salad and green bean casserole of course with apple crisp for dessert. We had lunch right away before everything got cold.

Before Dan and Linda arrived, the kids were and trying out a couple of their gifts they got in Pecos, including their rc cars. Robert got a pogo stick and Clara got stilts. She was doing pretty good on them after a few minutes. Robert couldn’t quite get the hang of his pogo stick though so after falling off one time, he angrily told me that he wanted me to throw it in a lake of lava 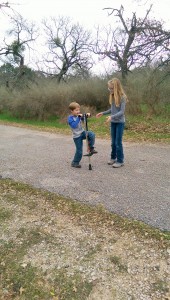 After our yummy lunch, we opened gifts. It was a beautiful day, minus the juniper. 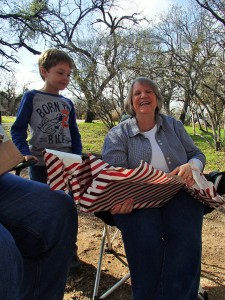 Several months back I had the idea of painting these little wooden dolls for the kids when they first started watching Gilligan’s Island. They were making scenes out of legos and making mini figures to resemble the characters so I thought they’d really like these. I let Linda in on my idea and asked if she’d like to make them since she’s a painter and all and she said yes

They turned out so cute and the kids love them. 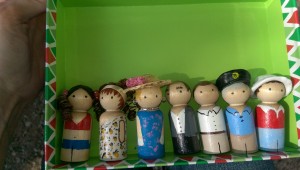 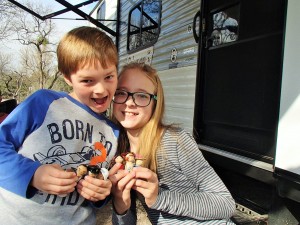 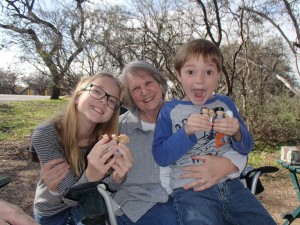 This is his “Why?” face. He loves his big Why? book he got from Uncle Tim. 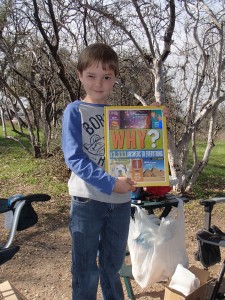 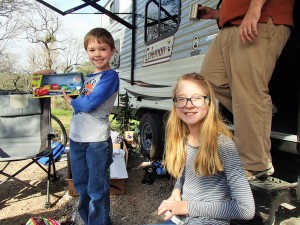 And a couple more Modarri cars to round out Robert’s collection, along with a case to carry them all. 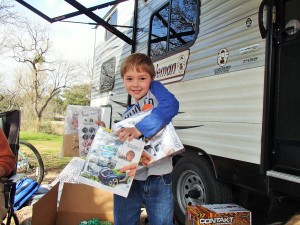 Grandpa is known for his creative gift wrapping skills. This flag holder required three boxes to get it wrapped just right. And she got an owl flag for all seasons. 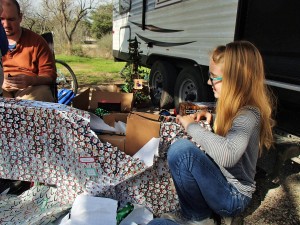 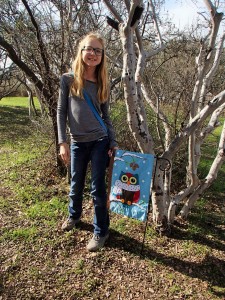 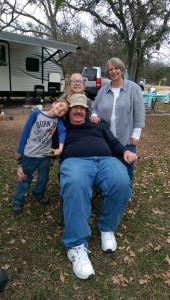 I’m glad they could join us, but I hate that Chris was feeling so horrible. He went through about 3 boxes of kleenexes those couple of days. Linda’s allergies flared up when she got to the park too so it wasn’t quite the picture perfect holiday we all hoped it would be.

That night before bed, we decided to go ahead and leave the next morning to come home, which was a day earlier than we had planned. It was obvious that he wasn’t going to get better until we got him out of there and would probably be dealing with an infection soon. It was a bummer because our last excursion was going to be hiking at Enchanted Rock, which I had really been looking forward to. But that’s ok. There’s always next time. We just needed to get him home.

So that night and the next morning I tried to do as much of the packing up as I could so he could save his energy and not go outside until he absolutely had to. I’m a total wimp and haven’t pulled the camper, nor have I ever pulled any type of trailer in my entire life, so I was sick with worry with the thought of me having to drive. Pulling a camper that I can’t see around. Through the hill country. And Austin. Both of which I am unfamiliar with. Turns out I’m a terrible person and Chris drove

I have done all of the unloading and camper cleanup, washed about 10 loads of laundry and bagged 6 bags of pine needles though so I hope that at least makes up for some of it. He was able to breathe better as we got on the other side of Austin, but then he started feeling worse and by the time we got home around 2:00, he was running a fever

He is slowly improving and has been fever free all day, but he’s still feeling pretty puny.

And so ends our 2016 Christmas Vacation. Hoping we start 2017 illness free!