Hmmmm, seems like I’m forgetting something……  Oh yeah, the last three months!! Hopefully I’ll get a summer re-cap up, but I’m not making any promises

If I do, I’ll probably backdate them so they stay in order.

So, just like that, summer is over and it’s time to hit the books. Robert went to fill out a form at Meet the Teacher last week and couldn’t remember how to write his numbers. Oopsie. We worked on literacy activities that were sent home for the summer, so there’s been lots of reading and a small amount of writing done, but math kinda slipped off the radar. Oh well, can’t win ’em all.

You’ll notice someone has on a superhero shirt.  I found it (and his shorts) at the resale shop and he actually liked it! I guess he’s decided to lift the ban on superheroes. Neither of them needed too many clothes, so I just picked up a few t-shirts and shorts at the resale shop to replace ones they’ve outgrown. I think Clara’s had a growth spurt this summer. I did splurge on a new first day of school dress for her. She doesn’t wear dresses to school much anymore, but she loved this one that’s covered in owls, so I relented. About half of her wardrobe is covered in owls now.

Much to their chagrin, both of their backpacks and lunchboxes were still good, so we didn’t have to go out and replace them. I bought them LL Bean backpacks to hopefully last, and they have held up really well. Clara got hers at the beginning of 2nd grade and it still looks new. I told her she could choose a new one for junior high next year. I will probably let Robert upgrade sooner though. I’m not sure I can convince him to keep his dinosaur bones one through 5th grade 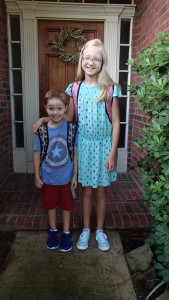 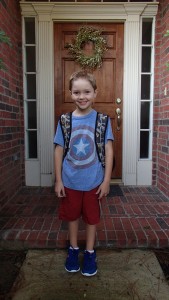 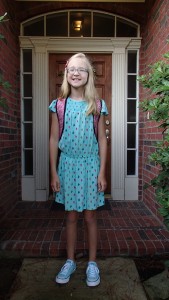 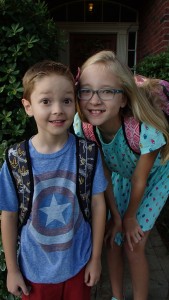 They both got back to school haircuts and Robert went with a shorter ‘do than usual. I’ve always hesitated because of his cowlicks, but I finally just said “what the heck” and had the girl go short. I think it’s cute. He likes spiking it up in the front with gel and was a bit obsessed with it and didn’t want it to get messed up those first few days.

They both said they wanted to ride the bus this morning, so I didn’t argue. I was going back and forth about driving them myself. I wasn’t too worried about getting him to his new class; I really just wanted to chat with my friends and some of the office and library staff and maybe meet some new parents. I really didn’t want to mess with the nightmarish traffic and parking at the school though, so I just sent them on their merry little way.

And now I can go run errands without bringing along whining, fidgety, pestering kids! Woohooo! Freedom!