Clara performed in her first real concert in December. I say real because the first year orchestra got to use their bows this time and they performed at the high school performing arts center instead of the junior high cafeteria. I was a little bummed that the fyo just wore their hoodies instead of dressing up though. The philharmonic and symphonic orchestras wore formal concert attire. 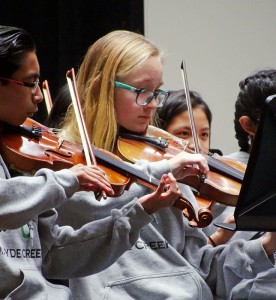 Clara is actually quite good at the violin and really does enjoy it. She wasn’t sure she even wanted to play violin, but I talked her into it. She had excelled in choir and intended to continue in junior high, but I really wanted her to at least try an instrument.  Linda’s mom had played when she was younger and she left her violin to Clara before she died, so I knew it would be special if Clara learned to play. I told her to give it a year and she could drop it after that if she didn’t like it. Turns out she was just nervous about learning an instrument and thought it would be too hard. Instead, she picked it up very easily, can play by ear and has been 1st or 2nd chair first violin these past two years. I’m glad she took a chance and humored her mother.